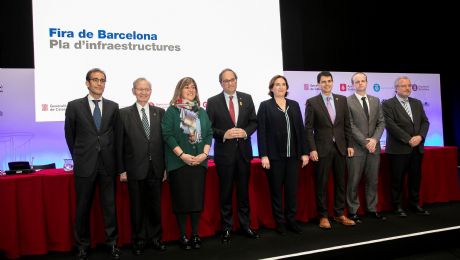 Over the next few years, Fira de Barcelonas Gran Via and Montjuïc venues will undergo a significant expansion and renovation process in order to reinforce the institutions leadership in the trade fair and congress sector, to increase its international competitiveness and to contribute to the territorys economic and business activity. This major trade fair infrastructure project, valued at 380 million euros, has the support of the Catalan institutions and it has been channelled through a protocol signed today.

The fairgrounds currently have a very high occupancy level and, according to the projections made, could reach saturation point in the mid-term. The above is taking place in an international context with a high degree of competition among cities when it comes to attracting large events, and major investments are being made to increase the capacity, functionality and efficiency of the facilities.

In this regard, the plan, which envisages the remodelling of the Montjuïc site, constructed on the occasion of the International Exhibition in 1929, and the expansion of the Gran Via venue, built in several phases between 1995 and 2011, reflects Fira de Barcelonas strategic commitment to remain a benchmark in attracting major international events, to address the growth of the events organised by the institution and to establish itself as one of the most important economic and social engines in the territory.

More exhibition area at Gran Via

With regard to the Gran Via site, designed by Japanese architect Toyo Ito, which currently has a gross exhibition area of 240,000 m2, it will be expanded to provide the institutions own and external fairs with growth potential, competing with the most important global exhibition facilities, attracting major events and holding several events at the same time.

Its expansion will take place on 40,000 m2 of land located on the block lying between Joan Carles I Avenue, Ciències Street, Salvador Espriu Street and José Agustín Goytisolo Street in LHospitalet de Llobregat, where there are currently two buildings and some unoccupied land.

This area will witness the construction of a two-storey building 60,000 m2 in size, in addition to premises for offices and services set aside for trade fair uses, which will be linked to the sites Hall 1 and Europa Pavilion by means of an overpass, extending the walkway connecting all the pavilions.

With this action the gross exhibition area of the Gran Via site will be increased to 300,000 m2; the facilities will thus become some of the most important in the world in terms of their space and their outstanding functionality, technology, quality, innovation and sustainability. Enlargement is expected to end in 2024.

In the case of the Montjuïc site, the study phase of the project titled Montjuïc Universe envisages the remodelling of the current space to adapt it to the exhibition-related demands of the 21st century, with functional, flexible, sustainable and efficient facilities that maintain the essence of the historical venue, intimately linked to the popular imagery of Barcelona. It will be built with a high level of urban and constructive quality, in line with one of the most emblematic areas of Barcelona.

It is a strategic project which has undergone definition for some time in partnership with Barcelona City Council, which is seeking to generate new development opportunities for the city and Fira itself, boost economic activity, commit to innovation and entrepreneurship and recover spaces for different citizen uses, enhancing the urban nature of the site and its interrelationship with the business network and the environment.

In this respect, the venue, once it has been remodelled, will house exhibition areas equipped with modular solutions to adapt to the needs of the different events, while there will also be areas for entrepreneurship, co-working and a showroom space for companies. Similarly, the Alfonso XIII Pavilion is expected to host congress activity in an auditorium, while the Victoria Eugenia Pavilion will be assigned to cultural purposes by the city.

These urban initiatives promoted by the City Council will involve the redevelopment of Reina María Cristina Avenue, which will become a large traffic-free area in the form of an esplanade. Similarly, a new street will be opened up, extending Guardia Urbana Street to channel the traffic in the area towards Paral·lel Avenue, between the current-day Hall 2 and the other pavilions, thus also providing the possibility of assigning new spaces for facilities and residential use within the city.

The project is scheduled to be completed in 2029, coinciding with the centenary of the 1929 International Exhibition, an event of major importance in Barcelonas exhibition history.

Signing of the protocol

The document, which establishes the commitments to be assumed by each of the signatory parties, states that the Catalan Government, together with the other institutions involved, will analyse and propose the most appropriate financing instruments for the undertaking of the important new investments, which are calculated to cost 380 million euros overall.

The protocol also envisages that the Fira 2000 holding company will draw up a project to adapt the new investments to be made in the two fairgrounds in financial and patrimonial terms, in accordance with the model that was applied in 2006 to finance the construction of the Gran Via site by means of the contributions from the different institutions. According to the initial estimates, the institutions will not have to increase the annual amount they currently contribute to Fira 2000 in order to finance the new investments and, instead, the current one will be extended beyond the initially envisaged period.

In this regard, within six months of the signing of the protocol, the parties undertake to sign a new Fira 2000 shareholder agreement in accordance with the financial project that has been agreed upon to renovate and expand the existing one related to the financing of the Gran Via site. In regards to funding, the protocol states the possibility of receiving funding from the European Union.

On the one hand, Barcelona City Council will promote the urban planning and the patrimonial formula suitable for the renovation of the Montjuïc site in accordance with the above Montjuïc Universe project. On the other hand, the City Council of LHospitalet de Llobregat will promote urban planning to generate an area within its boundaries permitting the expansion of the Gran Via site.

These actions come in the wake of the decision made by Barcelona City Council to award Fira the management of the CCIN (Barcelona International Convention Centre) for a period of 25 years, starting in November 2021; this is a measure that will enable the institution to head a comprehensive fair and congress strategy to manage the three venues existing in the city.