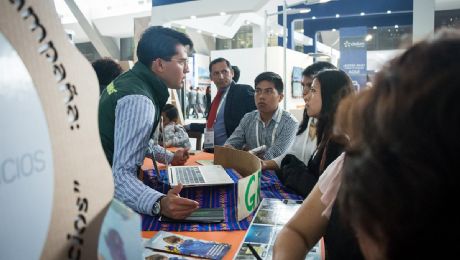 Smart City Expo Latam will bring together more than 350 cities under the theme Radical Inclusion, A Space For All

The Mexican city of Puebla expects to gather more than 13,000 attendees in the fourth edition of the event

From 2nd-4th July, Mexico will host a new edition of the Smart City Expo Latam Congress (SCELC), the premier event on urban innovation in Latin America and the Caribbean. In its fourth edition, the city of Puebla is expected to host more than 13,000 visitors, 280 speakers, 150 exhibiting companies, and more than 350 cities which will participate in more than 600 planned conferences. Under the slogan "Radical Inclusion, A Space For All", the SCELC will address the importance of equality and collaboration on the path to a more sustainable and human urban model.

Among the main subjects to be addressed by the congress are: Economic and technological development; Citizen empowerment and open government; Energy and the environment; Equality, learning, and culture; Mobility, and urban and land planning; and, Security and resilience. These issues will be analysed by internationally renowned experts such as urban planner Mikael Colville-Andersen; the Co-founder and President of the National Farmers Alliance, Mónica Ramírez; the General Director of the Cambridge Innovation Center Miami, Natalia Martínez; and the Executive Director of the Fundación Ciudadanía Inteligente, Renata Ávila, among others.

The exhibition area, where the latest technologies developed in the urban field will be exhibited, will be another of the core features of the event. Companies such as Huawei, Citelum, Clear Channel, Grupo Salinas, Smart Cities Mexico, Autotraffic, Metrocarrier, Acciona, Airbus, ATT, Comflyer, Comex, Kiwi Networks, Pulsen, Suez, and NEC will show attendees new solutions that could help urban managers address some of the main challenges of their cities.

In this regard, the presence of official delegations from different countries, including Argentina, Brazil, Colombia, Costa Rica, Chile, Ecuador, El Salvador, Guatemala, Peru, and Venezuela, is noteworthy. In addition, the SCELC will have the institutional support from organisations such as UN-Habitat, Unesco, Mobile World Capital, and World Enabled, as well as universities and other Mexican and Latin American organizations.

The key role of water
As a new feature, the iWater-Water Economy Forum will take place this year within the framework of the SCELC. The conference, which will be held on 2nd July, will feature prestigious experts in the field of water and sustainability such as Alexander Serrano, specialist in water resource management at the World Bank, and Adrián Pedrozo, of the Mexican Institute of Water Technology (IMTA for its Spanish original), among others. Together they will discuss crucial issues for the management of a critical resource in a context such as the Latin American one. Sanitation, management, challenges, technology, and digitalization are some of the subjects proposed for this eleventh edition of the Water Economy Forum. The day is part of the activities organised by the iWater Barcelona show that Fira de Barcelona organizes every two years.