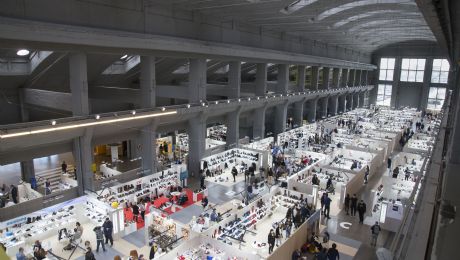 Promising debut for ShoesRoom by Momad

The new event organized by IFEMA in collaboration with FICE, which took place at the La Nave site from 1 to 3 March, attracted more than 2,700 professional visitors and 85 brands to its first event

ShoesRoom by Momad, the new and modern event developed by IFEMA in collaboration with FICE to promote the footwear industry, closed its doors with a promising outlook. The debut of this new commercial platform concept, held from 1 to 3 March in La Nave, a modern industrial setting outside the Feria de Madrid area, was well received in general, both by the 85 participating companies and the 2,700 professional visitors who came to this event with the footwear industry, in which the quality, innovation and creativity of Made in Spain could be confirmed.

Charo Izquierdo, the Director of Shoesroom by Momad, said she was happy with the results obtained in the first edition. "We have managed to get the sector to support this new event, not only the companies that participated, but also others that visited it and that have already indicated their intention to participate in the next one". However, added Izquierdo, "this is just the starting point, I think this trade fair model has the potential to grow more and better develop and, therefore, we have to continue working to reinforce the event and make it the sector’s great trade fair in Spain".

Visitors from all over the world

Among the more than 2,700 professionals who visited the show, there were buyers from all over Spain and from different parts of the world. Indeed, reinforcing the internationalization of participating brands is one of the strategic objectives of the event. This resulted in the launch in collaboration with Icex and the Federation of Spanish Footwear Industries (FICE) of an important programme of international buyers, composed of 49 representatives from 31 prominent establishments and distribution chains from Chile, Costa Rica, Ecuador, Guatemala, Peru, Puerto Rico, the Dominican Republic, South Korea, Taiwan, Saudi Arabia, Israel, Jordan, Kuwait and the Lebanon.

One of the most outstanding parallel events of ShoesRoom by Momad was the presentation of its 1st Awards for Innovation, aimed at all professionals and companies in this industry. The awarded companies were Excelsus, Unisa, Callaghan, Gioseppo and Mikonos. These awards were created with the aim of adding value to initiatives that work on the process of adapting to new business and consumer models, as well as on the constant development of the footwear industry and the professional work of the sector".

The prize in the category of Innovation in Retail went to Mikonos, an establishment from Logroño; the Fashion Innovation award to the firm Excelsus; and the award for Corporate Social Responsibility to the firm Gioseppo. Furthermore, the prize for Innovation in Technology went to Callaghan and the Lifetime Achievement Award to Unisa.

In addition, during the presentation of these awards, special mention was made of the figure of Tomás Moreno, recently deceased, because of his personal and professional commitment to this industry, as the ambassador of the La Rioja and Spanish footwear sector, both within and outside our borders.

ShoesRoom by Momad also included an interesting programme of presentations at its 1st Innovation Conference, organized in collaboration with the digital portal www.modaes.esand La Nave.

In a meeting about the challenges and future of the footwear industry, new presentation and promotion formulas for the sector were proposed, which, in the opinion of Charo Izquierdo, Director of ShoesRoom by Momad, should evolve towards "more intimate and specialized events, which allow the creation of a closer relationship between manufacturers, distributors and merchants". Pedro Alegría, from FICE, stated that the sector should move towards "innovative concepts, such as ShoesRoom by Momad, in order to maximize profitability". And Juan Carlos Fernandez, of the firm Pons Quintana, said that these events help "strengthen relations with customers and manufacturers, in addition to getting to know the trends of the sector". For her part, Maite Ruiz Atela, from Global Fashion magazine, warned that fashion "has to seduce and thrill to overcome the crisis of creativity that has occurred in recent years". And Diego de Vicente, founder of Moddo, encouraged people "to continue innovating and specializing in order to show something different and appealing to buyers".

In another meeting on digitalisation, also within the framework of the 1st Innovation Conference, the experts concluded that shoe merchants and manufacturers must join forces and collaborate in an omni-channel market. The founder of Moddo, Diego de Vicente, warned that "digitalisation does not only imply e-commerce, but also affects inventories, the experience of human teams or the global vision of sales"; Victoria Vera, of Icex, announced that soon this organisation will launch an influencers’ programme in markets in five countries, from which companies in the sector will benefit. Also, the creator of Medi-Shoes, Montse Expósito, affirmed that this system of real foot measurement will allow people to work out the size of feet of online buyers.

Other meetings were also held within the framework of the 1st Innovation Conference, such as the round tables on Digital Natives, in which Beatriz Cebrián from Beyton, Mónica Casal from Tandem Up, and Mireia Playá from Mireia Playá all participated; on Innovative Production as a stamp of brand identity, in which Clara Alfaro from 5ymedio and Carlos Adams, from Carlos Adams, took part. This conference also had a space to share with attendees two success stories in the Footwear sector, in which Basilio García from the Callaghan firm, and Enrique Bretos from the Pisamonaschildrens shoe stores took part.

Other activities parallel to the commercial activity of ShoesRoom by Momad took place in a space developed together with the Technological Footwear Centre of La Rioja (CTCR, in its Spanish initials), in which companies were able to show their models of footwear through holograms, and a broad plan of event activities on social media, so that participating brands could be seen online by the public at large.

In addition, the event included the latest technological innovations in leading brands, such as Callaghan and Mireia Playà, as well as CTCR and Inescop.

The next edition of ShoesRoom by Momad will take place from 20 to 22 September, 2019 at the La Nave venue, which hosted this recent event.