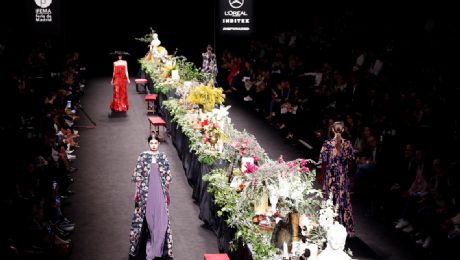 Thanks to the new dates, now opening the international fashion parade season, the event composed a higher quality programme of international buyers and press. Prestigious concept stores, together with outstanding figures and influencers from different parts of the world and a selection of top international fashion brands, took the starring role among the invited guests attending this event

This edition, which ran from 24 to 29 January at IFEMA and other venues in Madrid, brought together the parades and presentations of 43 leading creators and brands, and a total of 53,477 visitors

With a fully satisfactory result and a significant qualitative leap in its internationalisation, the 69th edition of Mercedes-Benz Fashion Week Madrid has concluded. This great Spanish design event, organised by IFEMA, was held from 24 to 29 January at IFEMA-Feria de Madrid and other points of the city.

The event was once again held in January, at the head of the international fashion show calendar, allowing MBFWMadrid to continue progressing in its internationalisation and attract to the catwalk more than 40 international professional guests, representatives from prominent points of sale and fashion distribution outlets, as well as well-known European, American and Asian media. Prestigious concept stores such as Luisa Vía Roma or Farfetch, amongst others, along with prominent figures and influencers from different parts of the world, such as Derek Warburton, Hilary Alexander OBE and Jessica Michault, and a selection of the leading major international fashion brands, such as Vogue Runway, Vogue Italia, Vogue Russia, Hola Fashion UK, Marie Claire Turkey, Grazia Mexico, as well as CNN, and the Reforma daily newspaper of Mexico, took centre stage in the programme of guests attending this edition.

In its complete tour of Made in Spain, which was expanded to over six days this time around, MBFWMadrid hosted the presentation of collections from 43 leading creators and brands, which confirmed that current Spanish fashion is sophisticated, avant-garde, diverse and packed with new creative energy. The event attracted a total of 53,477 visitors in this edition.

Just as last July, this edition was opened by the young creators from Samsung Ego, who held their day of parades on 24 January in Hall 14.1 of IFEMA-Feria de Madrid. On the 25th, designer Ana Locking made way for the parades of established designers, who presented their collections both at IFEMA and other points of the city. On the 29th, collection presentations were held at different locations in Madrid, by direct invitation of the creators Pilar Dalbat, Carlota Barrera, Pilar del Campo and Maison Mesa.

The novelties of this edition’s calendar included the incorporation of renowned Spanish fashion names such as Roberto Diz, Brain & Beast, and Juan Carlos Mesa with his firm Maison Mesa, as well as young creators Beatriz Peñalver, Carlota Barrera and Pilar del Campo.

The Desigual fashion company held an original event to show the inspiration that has shaped its collection for the upcoming Spring/Summer 2019, entitled "Drive me to ...". Different characters took part in this event, conversing light-heartedly in pairs in the back-seat of a Mercedes-Benz Class A about a variety of current affairs. Fashion, art, the future and authenticity. Nathy Peluso (@nathypeluso) participated with Miranda Makaroff(@mirandamakaroff); Chenta Tsai (@putochinomaricon), with Topacio Fresh(@topaciofresh); Inés de León (@inesdeleon), with Brays Efe (@braysefe, and Charo Izquierdo, director of MBFWMadrid, with Guillem Gallego, marketing director of Desigual.

The calendar of this MBFWMadrid edition also included interesting innovations as regards the choice of new scenarios. Such was the case of Oteyza, who gave his performance at the Teatro Español; Moisés Nieto in the modernist building and headquarters of the IED in Calle Lara; Pilar Dalbat, in the Patio de Cristal in Plaza de la Villa; and Pilar del Campo, in the car park of Núñez de Balboa, amongst others.

The Ailanto and Pedro del Hierro parades were also held at Palacio de Cibeles, seat of the City Council of Madrid, on Saturday, 26 January, whilst the Angel Schlesser parade was held at the headquarters of the Community of Madrid on Sunday the 27th.

With all of these events being held on creation and the latest trends at various locations in Madrid, MBFWMadrid contributed once more to promoting fashion and its different manifestations throughout the city, as other big capitals regularly do during their fashion weeks. The support provided for the event by institutions such as the Community of Madrid and Madrid City Council through various initiatives, as well as ACME, through its Madrid es Moda programme, proved fundamental in enabling these activities to be held.

Meanwhile, MBFWMadrid sponsored the exhibition Las Costuras femeninas de la Moda de España (Female threads in Spanish fashion), organised by Agencia Efe and ACME, which was inaugurated in the same week as the catwalk. The exhibition features a photographic journey through Spanish fashion between 1930 and 2018, accompanied by timeless garments from Spanish designers and accessories such as jewellery, hats and shoes. It can be visited until 31 March at the National Museum of Decorative Arts in Madrid.

Another innovation of this edition of MBFWMadrid was the new architectural project for Hall 14.1, which garnered a favourable reception among visitors. The modern and attractive spatial project contributed a renewed atmosphere and warmth to the site, as well as a new configuration of spaces. Both catwalks have been maintained, although one of them does provide greater functionality by offering a multi-purpose approach and contemplating different stage designs. Cibelespacio, the stand area surrounding the two catwalks, also offered a new setup, including a new location for the "kissing" , as well as for press rooms and international buyers. Also, the backstage offered a more attractive look.

The MBFWMadrid catwalk and popular fashion app 21 Buttons promoted the influencer get-together Fashion Talks by 21 Buttons,, which took place on Saturday 26 January with very high attendance. Pelayo Díaz, stylist, television collaborator and also influencer, acted as master of ceremonies and chatted about fashion with influencers in the sector Mery Turiel, Ana Moya and María Valdés. During the event, they talked about fashion, style and their points of reference, and created different proposals for new looks, with a selection of garments from companies participating in this edition of MBFWMadrid.

MBFWMadrid and its commitment to sustainability