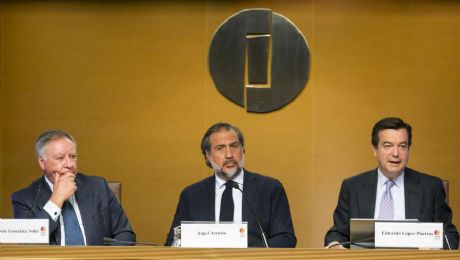 IFEMA’S growth leads to skyrocketing economic impact on Madrid as revenue rises to €4,374 million per year, with 26,168 jobs

?With a contribution to the finances of Madrid in 2018 of €4,374 million and 26,168 employees, IFEMA has established itself as one of the city and regions most important economic drivers. The figures, taken from a KPMG report, stem from the remarkable growth experienced by IFEMA last year, in which it expanded its activities to serve 33,203 exhibiting companies – up 7% – and 3.6 million visitors, an increase of 14% over 2017.

The economic impact of IFEMAs fair and congress activities, which have increased by 25% in terms of revenue and 40% in terms of employment has had a significant impact on its importance to the citys GDP, coming to represent 3.2% of it, while in the Madrid region it accounts for 2.1%, in both cases half a percentage point more than the estimate made in KPMGs previous report.

IFEMAs 2018 balance can be summarised through a series of new records: a total of 119 fairs, 12 of them abroad; 8 large congresses with exhibitions, as well as numerous conventions, festivals and other events aimed at professionals and the general public, a total of 720 events, up 21% on 2017. An extensive programme that has allowed IFEMA to increase its turnover to €138.5 million, 17% more growth than in 2017. An EBITDA of €27.7 million (up 23%), doubling its net profit to €10.8 million.

The significant jump in the economic impact of IFEMAs activity in Madrid in key sectors such as hotels, commerce and transport, has been further strengthened by the greater internationalisation of its business. Foreign exhibitors already account for 29% of the total, while foreign visitors represent 12% of all attending. These correspond to the fact that in 2018, Madrid hosted 51% of international fairs in Spain, well above cities like Barcelona, with 22%, and Valencia, with 7%.

The stimulus created by this contribution of economic value and the positioning of Madrid as one of the international leaders in the MICE market helps make progress on IFEMAs roadmap. In 2019 this will once again be evident with a growth target that will see it invoicing €145 million, and with a business portfolio that will exceed 100 fair activities and 700 events of various kinds, in addition to an estimated 35,000 companies and 4 million visitors participating.

The approved budget for 2019 likewise confirms the fulfilment of IFEMAs strategic plan, with a focus on a wide range of actions to enhance the growth of its asset portfolio (through fairs, conferences, external fairs, major events, leisure activities, services and projects abroad), and consequently of its revenue, bringing it to €202 million by 2022. To achieve this goal, IFEMA has also proposed the management of new spaces and the expansion of its current venues. Of special interest here is the Municipal Conference Centre, which since January of this year has come under IFEMAs responsibility, as well as the IFEMA Valdebebas expansion project. Planning and designs are at a very advanced stage and awaiting the administrative green light.

IFEMAs growth in 2019 will be based, as indicated, on the strength of its trade fair programme, which will be enriched by the launch of new events that it will either organise itself or with blue-chip partners, such as MORNING, DIGICOM EXPO and ORGANIC FOOD IBERIA + ECOLIVING IBERIA. Moving on to events of another kind, this year will see the July launch of CAMPUS IFEMA THINKINDS, which seeks to stimulate the entrepreneurial potential of children aged 9 to 16 by tapping into multiple intelligences. Activity levels will also increase through the holding of major world congresses. Of special importance here for another year will be the medical sector, which will hold three of its largest events worldwide in Madrid: EULAR (the European League against Rheumatism) with 15,000 attendees; EADV, the Congress of the European Association of Dermatology and Venerology, with 10,000 attendees expected; and ERS, the International Congress of the European Respiratory Society, with 18,000 expected to attend. In other sectors, the World Congress of Air Traffic Management (9,000 attendees) will once again be held at IFEMA.

Also deserving a special mention is the contribution by new lines of activity, which had great success over the previous year. If we only take concerts and music festivals into account, IFEMA has already confirmed events for 2019 that will bring more than half a million people to its facilities, which has led the company to launch its own ticketing platform for public events (www.entradas.ifema.es).

IFEMA also continues to expand its portfolio of franchise fairs in other countries. This year events will be held in Colombia, Chile, Mexico and Portugal, including two newcomers: TRAFIC LATINOAMÉRICA and FORO DE LAS CIUDADES in Medellín and MULAFEST Acapulco, which will be joining ARCO Lisboa and SALÓN LOOK Santiago de Chile.

With its customer-centred activities and the pursuit of excellence in service, IFEMA continues to make a significant investment, enabling not only a spectacular modernisation and improvement of its facilities, but also an acceleration of its digital transformation and of management model , and adapting, as it has done recently, its organisational structure to favour internal talent as well as fostering a change in business culture. Investment in 2018 totalled €18.8 million, a sum that will increase to €25 million in 2019, including major projects such as the modernisation of all LED lighting on its premises and the digitisation of information and advertising media, as well as new investments in the area of security. In addition to this, over €5 million will be allocated to Palacio Municipal over the current year, premises that passed into IFEMAs hands in January 2019.