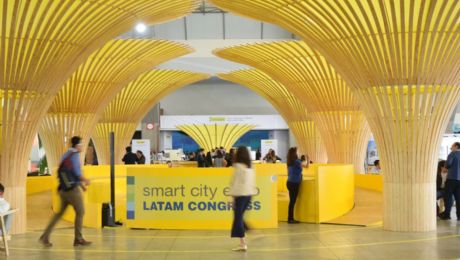 This September Fira is helping to organize the editions of Smart City Expo in Mexico and, for the first time, in India

Fira de Barcelona is stepping up its international expansion with a presence in four of the five continents already. Its activities as a fair consultant and operator in up to 12 countries in Europe, Latin America, Asia, Africa and the Middle East have grown in recent years: between 2017 and 2018, it will have taken part in the organization of 20 fairs adding up to over 125,000 visitors and 1,200 exhibiting companies, in addition to carrying out other venue management and fair consultancy projects. This September Fira will co-organise next weeks editions of Smart City Expo in Puebla (Mexico) and, for the first time, also in Jaipur (India).

The event with the most international impact has been Smart City Expo World Congress, the world’s leading event on intelligent cities organised by Fira de Barcelona since 2011, and which has already been held in nine cities across the world including Japan, Turkey, Morocco and Argentina.

The next one will take place from September 11th to 13th in Puebla (Mexico) with the third edition of the Smart City Expo Latam Congress. This is one of the most successful versions of the fair and the numbers this year can vouch for it: 140 participating companies, 12,000 professional visitors expected, over 100 government delegations, 50 collaborating institutions and 220 speakers, including Robert Muggah—co-founder of the Igarape Institute and security, migration, cities and development expert—and Charles Landry, widely praised for putting creativity at the service of urban transformation.

It will be followed by the first edition of Smart City Expo India from September 26th to 28th, which will be held in the city of Jaipur with the collaboration of national and local governments. Under the motto “Smart India: Making it happen”, this event aims to show solutions to tackle the big challenges of Indian cities in the fields of social development, circular economy, innovation and digital governance, urban mobility and smart destinations. Over 100 cities, 120 companies, 6,000 visitors and 100 speakers are expected to take part in the congress.

This meeting in India comes after the one in Curitiba (Brasil), which was also held for the first time last February. “These initiatives strengthen the presence of Fira de Barcelona around the world and respond to the strategic plan of becoming an international fair operator,” says company International Business Director Ricard Zapatero. On this note, he adds “our goal is to promote the presence of our exhibitors abroad, offering them business opportunities whilst showcasing our expertise.” Zapatero highlights that “Latin American counties and some areas of the African continent are emerging markets with great potential for development in the near future, especially in sectors promoted by Fira such as technology, urbanism and construction, food, tourism, and the car industry, among other industries.”

Fira de Barcelona has become the first foreign fair operator in Cuba after the 2016 agreement with the Palco Group, who manages the Pabexpo fair venue in Havana. Since then, Fira has taken part in the organization of seven fairs, among them two editions of HostelCuba (hotel and catering) and Feria Alimentos Cuba (food), as well as PacGraf, which was devoted to the packaging industry, Securtec (security) and Energías Renovables (energy innovation).

Its Latin American expansion has also strengthened in Mexico with the 2017 establishment of Fira Barcelona Mexico together with local company Mercados Mexicanos. Fira’s goal is to boost the development of several fairs in the country such as Alimentaria, Firas flagship fair for the food industry, which, in addition to being in Portugal with Alimentaria Horexpo Lisboa, is also present in Mexico with the annual edition of Expo Antad & Alimentaria México in the city of Guadalajara. Fira is also working to promote the edition of Smart City Expo Latam, in addition to collaborating in the organization of sessions on intelligent cities in the area.

Its experience in designing strategies to boost the fair business has enabled Fira de Barcelona to take part in the management of venues in other countries, such as the Doha Exhibition and Convention Centre (through its VPM joint venture with company Elan), which will host 19 events throughout 2018. In addition to managing the venue, Fira also co-organises fairs like Motor Show, which is devoted to the car industry, or Made at Home, which is dedicated to domestic entrepreneurship.

Another outlet for the company’s foreign activities are strategic consultancy services to other venues and operators to enhance their business models for the creation and/or optimisation of fair projects and spaces. As of 2018, Fira de Barcelona is acting as consultant to fair venues in Morocco, Ethiopia and Colombia and has more projects in the pipeline for other countries.