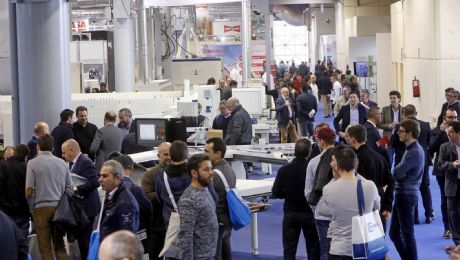 The biennial trade fair has increased the number of foreign exhibitors by 15% over the last edition, with companies coming to exhibit from 17 countries. The organisers are expecting more than 3000 international buyers to attend from 30 different markets.

The countries of North Africa, the EU (especially France and Portugal), Latin America, the Balkan countries and Sub-Saharan Africa have been the priority target markets for the trade missions organised by Feria Valencia and trade associations ARVET and AFEMMA.

With just over a month to go before it opens its doors, FIMMA – Maderalia is putting the final touches to this next edition of the fair, which takes place from 10th to 13th March at Feria Valencia. This edition is raising high expectations, not just amongst Spain’s manufacturers and professionals but also in the international marketplace, which has shown renewed interest in Spain’s biennial fair.

One good example of this is that the upcoming fair boasts the biggest offering of recent years in terms of the number of foreign exhibitors. The most recent figures indicate a total of 132 foreign exhibitors, 15% more than at the last edition of the fair – and it is of course quite possible that yet more companies will come on board.

What this means is that the fair’s international content has grown from just under 25% last time round to more than 30% of the total offering this year. In other words, almost one in every three exhibitors is a foreign company. The number of countries contributing to this percentage has grown too, standing now at 17:  Austria, Belgium, Brazil, the Czech Republic, Denmark, France, Germany, India, Ireland, Italy, Poland, Portugal, San Marino, Switzerland, Turkey, the United Kingdom and the USA.

It has to be pointed out that, with 38 companies exhibiting, Italy is the foreign country with the most product on show, followed by Germany and Portugal.

In terms of visitors, FIMMA – Maderalia has given its international buyer recruitment campaign a significant boost ahead of this year’s show. It has rolled out a number of promotional initiatives as well as arranging trade missions to countries considered to be key target markets for the exhibitors at this year’s fair.

One initiative was Feria Valencia’s directly targeting foreign buyers to invite them to attend the fair as guests. With help from FIMMA – Maderalia exhibitors themselves and from machinery trade association AFEMMA, a number of VIP guests were selected, who will be receiving their accommodation free of charge. These are professionals with considerable purchasing power who operate within sectors identified as key this year, such as contract specifiers and professionals.

The guest buyer programme prioritised markets with which Spain has strong trading links such as North Africa (Morocco, Tunisia and Algeria) and the Euro Zone, especially France and Portugal.

To stimulate business with foreign buyers, FIMMA – Maderalia has also partnered with trade associations ARVET (Spanish Exporting Companies Group) and COFEARFE (Federation of Spanish Manufacturers of Ironmongery and DIY Products) to set up a schedule of ‘B2B’ meetings.

These are 20-minute-long business meetings between visiting international professionals and exhibitors and are designed to reveal new opportunities and trends, facilitate the generation of international business, synergies and partnerships and make exhibiting companies more visible and accessible to future customers.

To take part, both exhibitors and visitors need to register on the activity platform, which channels requests for meetings. Once the request has been accepted, the platform will generate a schedule in line with each participant’s commercial interests. The markets involved in the B2B meetings include Latin America, the Balkan countries and Sub-Saharan Africa.