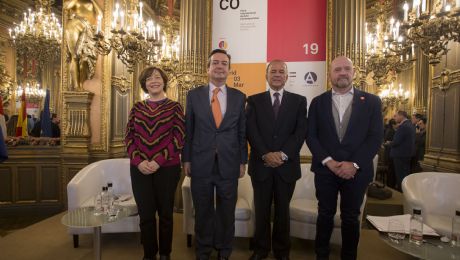 A more architectural ARCOmadrid to enhance the visibility of the artist

From 27 February to 3 March

A total of 203 galleries from 31 countries are taking part, 166 of which are part of the General Programme, in addition to the curated sections: Peru at ARCO, with a selection of 24 artists from 15 galleries; Dialogues, with 13 galleries and Opening, with 21

About 40% of the galleries are participating with programmes focused on the presentation of one or two artists from different environments, to which 38 special projects distributed across the fair are added, underlining ARCOmadrid as a space to get to know artist work.

The Fair consolidates its Latin American projection with the presence of Peru as the guest of honour.

From February 27 to March 3, a new edition of ARCOmadrid will be held in Madrid and organized by IFEMA, turning the Spanish capital into a major attraction for collectors, galleries, artists and art professionals from around the world. The fair, in its 38th year, continues to adjust its spaces and presentations to the needs of the galleries and interests of the curators. In addition to the Peruvian artists participating in the `Peru at ARCO` programme, galleries have chosen to present one or two artists, with an increasing contribution of special projects distributed across the fair, which will evidence the complicity and close collaboration of the galleries with the artists. All this has facilitated the participation of different architects and designers to form a more architectural fair and constitute a new format for ARCOmadrid.

ARCOmadrid 2019 will be held in Halls 7 and 9 of IFEMA with a total of 203 galleries from 31 countries, 166 of which are part of the General Programme, in addition to the curated sections: Peru at ARCO, with a selection of 23 artists from 15 galleries, Dialogues, with 13 and Opening, with 21. This year will once again be a benchmark for research, discovery and knowledge of new creative talents. In this respect, about 40% of the galleries are presenting projects from individual artists or those in dialogue on their stands. Similarly, 38 artists projects are distributed across ARCOmadrid, which also confirms the galleries commitment to presenting ambitious and risky works and projects.

In this context, Madrid in February will be an exceptional moment to celebrate collecting in Latin America with the coinciding of different projects that may be seen in the main art centres and museums of the capital. Casa de América will host the Jan Mulder collection; the Real Academia de Bellas Artes de San Fernando, the Eduardo and Mariana Hochschild collection; the Instante Fundación will exhibit a show promoted by CIFO Europa with Peruvian artists from the collection of Ella Fontanals-Cisneros, Alberto  Rebaza Torres, Armando Andrade de Lucio and Juan Carlos Verme Giannoni. Sala de Arte Santander will be hosting the Teixeira de Freitas collection, with Sala Alcalá 31 presenting Latin America in the CA2M and Fundación ARCO Collections.

In addition to these exhibitions there are others promoted by various Peruvian institutions and public bodies, including the Ministry of Culture, the Ministry of Foreign Affairs and Promperú. Under the coordination of Fietta Jarque, all will form the parallel programme Peru at ARCO`, as well as other events developed within the framework of the Peru Forum, organized by Miguel A. López, and with the participation of artists, historians and curators who will analyse the particularities of Peruvian contemporary art.

The quality of new galleries participating in ARCO 2019 will be one of the particular features of the next edition, which includes a total of 45 new galleries.

The main focus of the Fair, the General Programme, will consist of 166 galleries selected by the Organising Committee, 20 of which are new, including, most remarkably, Meyer Riegger, Rodeo; Timothy Taylor and Edward Tyler Nahem. In addition to these, others that have underlined their confidence in ARCOmadrid, such as Alexander and Bonin, Carlier Gebauer, Chantal Crousel, Esther Schipper, Gregor Podnar, Hauser & Wirth,König Galerie, Raffaela Cortese and Thaddaeus Ropac.

In addition, ARCOmadrid continues to support projects by individual artists and those in dialogue, once again hosting SOLO / DUO. Of the galleries taking part in the General Programme, 30 will dedicate their stand to one or two artists, including Miriam Cahn, Marcius Galan, Lia Perjovschi, Glenn Ligon and Jenny Holzer.

The Dialogues programme will have 13 galleries selected by Agustin Pérez Rubio – the co-curator of the Berlin Biennial – and Catalina Lozano – associate curator of the Museo Jumex and an independent researcher – whose stands will generate an intergenerational dialogue between artists from different geopolitical contexts. The space will host the work of galleries artists such as Luisa Strina (Anna Maria Maiolino and Magdalena Jitrik), DVIR (Jonathan Monk and Naama Tsabar), Patricia Ready (Cecilia Vicuña and Voluspa Jarpa),PPOW (Carlos Motta and David Wojnarowicz) and Ultraviolet Projects (Vivian Suter + Elisabeth Wild).

The Opening programme will once again be focusing on galleries with a history of a maximum of seven years with the aim of providing new information and aesthetic experiences. The programme will consist of 21 galleries selected by the independent commissioners Tiago de Abreu Pinto and Ilaria Gianni. A programme that includes research beyond the usual art centres, including galleries such as Bombon Projects(Barcelona), Clima (Milan), Embajada (San Juan, Puerto Rico), Francisco Fino (Lisbon), Rodríguez (Poznan), Sé (São Paulo) and Sindicato (Santo Domingo).

This section will have its own space for meeting and presentation of projects at BodegaOpening, an ephemeral wine bar designed by Ansón & Bonet.

ARCOmadrid, as part of its goal of renewing and promoting a new collecting, returns to present new initiatives. It is again providing its freeadvice service in the purchase of works during the Fair, First Collectors by Fundación Banco Santander, as well as reinforcing the Young Collectors programme by inviting around thirty young international collectors. The virtual platform Artsy.net will also again be offering the opportunity to explore the Fair and its works through its website and via the Artsy App. A series of actions designed to guide people who are starting to buy art and contribute to the promotion of collecting and contemporary art, that are the foundational purposes of Fundación ARCO.

Through ARCO, private companies of national and international prestige will be joining initiatives for the promotion of acquisitions and the recognition of artistic creation, through the delivery of different awards including the Audemars Piguet Award for the Production of a Work of art; Illy Sustainart Award; Beep Award for Electronic Art; Cervezas Alhambra Award for Emerging Art; Catalina D Anglade Award; ART Situacions Award; Han Nefkens Fundación ARCO Award; ARCO / Comunidad de Madrid Award for Young Artists and the Opening Award.

ARCOmadrid once again features the voices of contemporary art professionals, consolidating its position as a platform for reflection and knowledge essential to critics, curators, directors of institutions and other professionals. The participation of more than 200 curators and other agents linked to art allows, in addition to the development of an intense programme of debates will establish a meeting point, link and exchange with the galleries.

On this occasion, the Forum opens with an opening talk by Mario Vargas Llosa, before giving way to the Collecting Forum that, with the collaboration of Fundación Banco Santander, offers a conversation between Jean-Jacques Aillagon and Marta Gili – with the collaboration of the Institut français dEspagne–, as well as sessions led by George Stolz and Judith Benhamou-Huet, the latter with the support of Ámbito Cultural of El Corte Inglés. It will also reflect on new collecting, in a talk led by Bea Espejo, while Agustín Pérez Rubio will lead the Artists Forum session.

The Peru Forum, organised by Miguel A. López, will again be hosting conversationsabout the particular features of Peruvian contemporary art, with the participation, among others, of Fernando Bryce, a visual artist; Roberto Huarcaya, photographer and general director of the Centro de la Imagen; Christian Bendayán, artist and former director of the Instituto Nacional de Cultura de Iquitos; Natalia Majluf, art historian and former director of the Museo de Arte of Lima, or Florencia Portocarrero, curator of Proyecto AMIL public programmes.

The Professional Meeting sessions will once again be closed to the public. At the Meeting Diálogos, led by the curator Catalina Lozano, and at the Meeting Opening, with Tiago de Abreu Pinto and Ilaria Gianni, information will be exchanged on both sections of the Fair. The Guests Museums Meetings will be two meetings organised with the collaboration of AECID and Acción Cultural Española (AC/E), which will be attended by more than 50 professionals, many of them from Mexico.

The programme for the promotion of Spanish art will also be held, organised with the collaboration of AC/E and coordinated by hablarenarte. It will include visits to ARCO with the aim of facilitating the meeting with gallery owners Spanish artists related to the interests of each invited professional.

Meanwhile, Ana Longoni, the director of the public activities department MNCARS, Tamara Díaz Bringas, the coordinator of Cartas, a MNCARS publication and Mabel Tapia,coordinator of LInternationale, in association with AECID, will lead the 8th International Meeting of European and Iberoamerican Museums, which will bring to Madrid about 60 directors and representatives of museums from around the world.

ARCHITECTURE, DESIGN AND RESTORATION AT ARCOmadrid

Architecture and design to the fore again this year. Burgos & Garrido Arquitectos is responsible for the spatial design of ARCOmadrid, as well as the Peruvian architects Mariana Leguía _ Maya Ballén, who will design the galleries space of Peru at ARCO.

The VIP Lounge will be a space created by Lázaro Rosa Violán Studio, where gallery owners, collectors and special guests can enjoy a rest and meeting area, as well as a restaurant operated by Vilaplana, under the gastronomic management of the Peruvian chef Rafael Osterling. Inside, it will host the Ruinart space, this time designed by Pepe Leal, as well as Alhambra, Ron Zacapa and the NH Collection. The Audemars Piguetstand features the work of Andrea Galvani, winner of the 7th Award to the production of a work of art.

The Fundación ARCO lounge, with the work of the artist Armando Andrade Tudela, will include the special intervention of The Nave; Room 38 will be designed by Casa Josephine; and the Presentations Room will be decorated by L.A. Studio.

ARCOmadrid will make public spaces and areas of rest, meeting and gastronomy such as ARCOlunch and Espacio Comer available to professionals, with a varied offer from Mallorca, NONSOLOCAFE and illycaffè, Sushita and Alhambra, NuBel, as well as Ron Zacapa, and the Lovers Gastro Lounge, dedicated to the cuisine of Peru.